What Do You Think About Nepal?

We all have our favorite questions in life. My top two have always been 1) do you want to get ice cream? or 2) would you like to say hi to my dog? For obvious reasons, I believe these are the two best questions any girl could be asked; however, I think those two sentences have recently been replaced by the remarkable what do you think about Nepal?

Let me set the stage for you. It was two weeks ago and Eid weekend was quickly approaching. In Dubai, many people go on holiday to celebrate the end of Ramadan or to enjoy a nice long weekend away from the heat. I knew that my boyfriend Simon and his best friend Chris were planning a little get away, but I was under the impression it would be to Abu Dhabi, or Ras Al Khaima, or somewhere relatively close by. You see, I am still so new to this area that I would be more than happy to just go across town and explore a new part of Dubai- but the boys had something else in mind. So, one night, Simon and I were enjoying our massive burritos from a local Mexican restaurant when he popped the question. No, not that one, but the casual yet still exciting, “what do you think about Nepal?”

My instant reaction was “OMG are we going to Nepal!!!??? (I believe that as an American girl, I have the right to be overly excited about something at least once per day, i.e. a sale at Zara, meeting someone who has one (tiny) thing in common with me, a response to one of my emails (seriously, people, respond) I just can’t help it. It’s in my genetic makeup). Anyway, Simon’s very Danish response was, “wouldn’t that be nice?” And just like that, my new favorite question was born.

A few short days after we booked our tickets, Simon, Chris and I were on our way to Kathmandu, Nepal. Unfortunately, our first impressions were not what we were expecting. Driving to our hotel in the middle of the night was a rather treacherous feat; the damp streets were narrow and congested with old cars honking generously at each other. There were copious amounts of stray dogs wandering in front of the dilapidated buildings- all coated with dangling clothes that fluttered in the wind and rain. As we jolted along, we drove past a man casually peeing on the side of the road as well as an unattended fire that just smoked itself away next to garbage and other smut. Our hotel was in the center of Kathmandu and was a serious contrast to the reality that we had just been exposed to. We were instantly greeted by guards who helped us into the building and were then guided into our room by an older Nepalese gentleman. This man gave us an earnest tour of the room and proudly shared that the hotel had complementary water and coffee for us to enjoy. After he left, I felt a bit sad. I had never seen such poverty before and felt ashamed of my own privilege. Time and time again, I am reminded that much of life is predetermined by one’s birthplace. I don’t have a college education because I am smarter or better than anyone- not at all. I was just lucky to be born into a society that, as a whole, has its basic needs met allowing for personal development through education. On the other side of the coin, not all of the Nepalese people have their basic needs met causing a much different reality than the one I was born into. These thoughts lingered all weekend, and continue to stay with me now.

The next day, Simon, Chris, and I chose to hike Shivapuri Nagarjun National Park which was a six hour adventure around the Kathmandu Valley. On this hike, we were told that we might see leopards, giant snakes, or barking deer; however, the only wildlife we were exposed to was a caterpillar, a water buffalo, and a boatload of goats. (Currently, there is a large trend back in Oregon that revolves around goats (goat yoga, goat caddies, etc.) so I was rather pleased with this outcome; however, the boys were really hoping for the barking deer, since, well, they bark). On the hike, we went to the Nagi Ghompa Monastery where we saw a group of children playing tag in the field. Our guide mentioned that most of the kids lost their parents in the 2015 earthquake and the monastery took them in after the disaster. You could tell that the topic made him very sad; he said that over 8,000 people passed away from the earthquake and that it was the scariest moment of his life. Throughout Kathmandu, you can still see the aftermath of the 2015 earthquake with much of the city coexisting with piles of rubble and debris. In some ways, it reminded me of the forest fires of Oregon; after a certain amount of time, new life rebuilds and does its best to thrive in the environment given the circumstances. Despite this significant tragedy, it is impossible to not see the resilience of the Nepalese people. Seeing the children at the monastery playing in the field, or our guide talk about the exotic animals he had seen was incredibly inspiring. Day one ended with sore feet and a humble heart.

The second day that we were in Kathmandu was spent walking around the city. Not even five minutes into

our day, we met a local guy named Sunny who adopted us for about an hour. He was overly friendly, smelled faintly of alcohol, and was apparently very excited to meet foreigners. Sunny took us all around the area- to temples, the local markets, and the cultural sites all while talking fast and providing insight to the attractions. I wanted to be polite to the gentleman who quite literally, changed his walking direction to meet us, but Chris was suspicious of the guy. About an hour into our impromptu walking tour, Sunny led us to a storefront and began picking out heaps of food that he expected us to pay for. The prices were significantly higher than the other shops so we knew that Mr. Sunny must have had a deal with the shopkeeper. We gave him a small bill that would have surely covered something, but Sunny shook his head at us and called it “useless.” At that point, we walked away as there was nothing more we could do and we didn’t want to be caught in a sticky situation.

Though we were targeted as foreigners, I don’t entirely blame Sunny for the attempt at getting food and money out of us. When people don’t have the means to support themselves, they will go to great lengths to have their basic needs met. If that was Sunny’s reasoning behind targeting us, then I feel badly that he was in such a desperate situation- one that I’ve been fortunate to have never experienced; however, I surely don’t support dishonesty or scams of any sort. Unfortunately, scams were something we had to look out for as westerners in Nepal, especially since we drew so much attention to ourselves. Never in my life had I been stared at more heavily than in Kathmandu- and I’ve been in some pretty public positions during my time as a titleholder in the Miss America Organizations (sashes and crowns hardly go unnoticed!) I think as a female with blonde hair, people were extra curious about us and they made no effort at hiding it. Fortunately, most Nepalese people were honest, respectful, kind, and very lovely people overall so I always felt safe.

When walking by the shops, we were met with kind smiles and the phrase “Namaste.” Rarely did we feel pressured by the shopkeepers to purchase anything, but they were always there if we had any questions. Each of the established stores were quite petite, but the Nepalese did the best they could with the space they were allotted. From the floor to the ceiling (and the window to the wall!) stores would be packed with products. My favorite stores were always the ones that sold fabrics because the colors were so vibrant and beautiful. In addition to the local stores, many Nepalese people would also set up shop along the streets with their own products to sell. I have a great admiration for their work as it was just so simple and honest. It was as if they were saying, “this is what I have to offer- nothing more, nothing less” which I found to be very respectable. I ended up buying a gorgeous strand of vibrant orange flowers that acted as a necklace and loved seeing the honest joy of the boy who sold it to me (not to mention the joy the flowers gave me as well!) 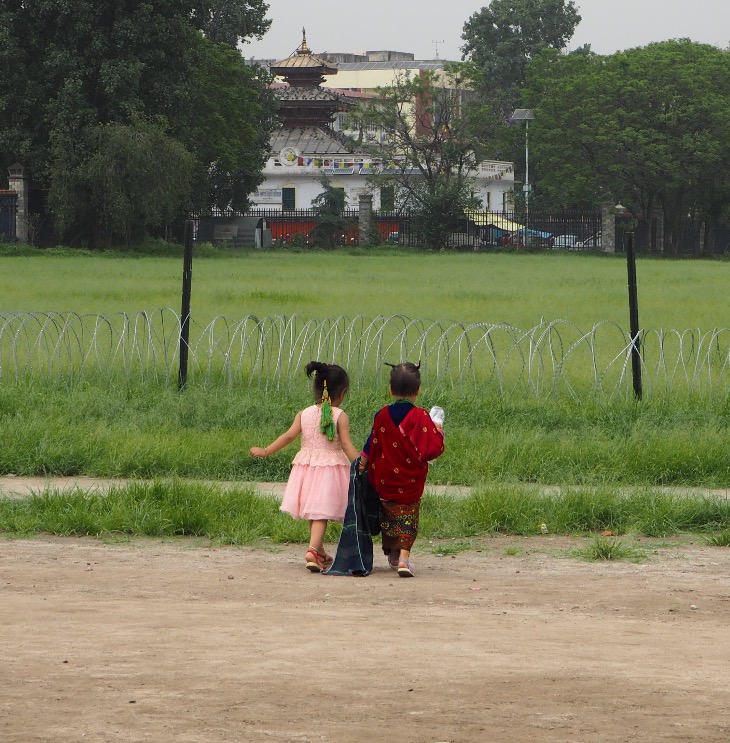 After the first part of our day, we happened upon a festival in a large field next to a busy road. I still don’t know what the festival was celebrating, but there was music, hundreds of people dancing in a circle, and an audience watching the performance. It was remarkable to see the people celebrating and wearing gorgeously colored robes, beads, and large smiles. My favorite moment was when a group of young Nepalese girls asked to get a selfie with me. I (of course) said yes and Simon was able to capture another photo quickly after. These girls were completely lovely and it made my day to be able to interact with them! The last great adventure of our time in Nepal was a trip to Monkey Temple which got its name due to the population of monkeys who reside on the grounds.

Looking back on my time in in Kathmandu, I feel that I have a more educated answer for the question “what do you think about Nepal?” My answer? That it is a beautiful country with kind people doing the best they can with what they have. The people are resilient, the sights are eye-opening, and I feel very fortunate to have been able to experience Kathmandu, Nepal.

For more information of if you want to get involved, here is a list of organizations that help the people and animals of Kathmandu.

Want to see more of Nepal?! Check out my very first vlog here! As always, if you have any questions or comments, feel free to reach out or message me. (: